For years, our annual Wisconsin preview has been a source of particular excitement for me. I say this mostly because the team is perennially underrated by the national media, and also because Bo Ryan’s laser-like focus on tailoring his team’s strengths such that they provide large marginal advantages on a point per possession basis is great word fodder.

But this year? I’m finally bored with the Badgers. Well, not so much bored as that I’m not sure I have much to say that everyone else isn’t already saying. Wisconsin will be good, its offense should be great. While you still see lazy takedowns using those same tired clichés, I think about 80 percent of that is Grantland, and boiling teams down to tired clichés is essential to Grantland’s signature absurd comparison pieces.

That said, for years we at BTG have been telling anyone who would listen that the Badgers were—despite their deliberate pace—a generally stellar offensive team. And while there has been a creeping acceptance of tempo free analysis such that I heard a couple of Pomeroy mentions during March Madness last season, this is still a sport dominated by “per game” numbers.

So what changed last year? How did Wisconsin’s offense switch into overdrive? Well, for that, let’s take a look at Bo Ryan’s tenure. Over his 13 seasons at Wisconsin, the two basic tenants of Bo Ball that have remain unchanged are:

While there have been many tendencies over the years, those two staples are about as reliable as the sun rising in the east. But despite that consistency, there’s been a number of tweaks offensively and defensively elsewhere. For instance, beginning in the 2008-09 season, Ryan became obsessed with three-pointers at both ends of the floor: 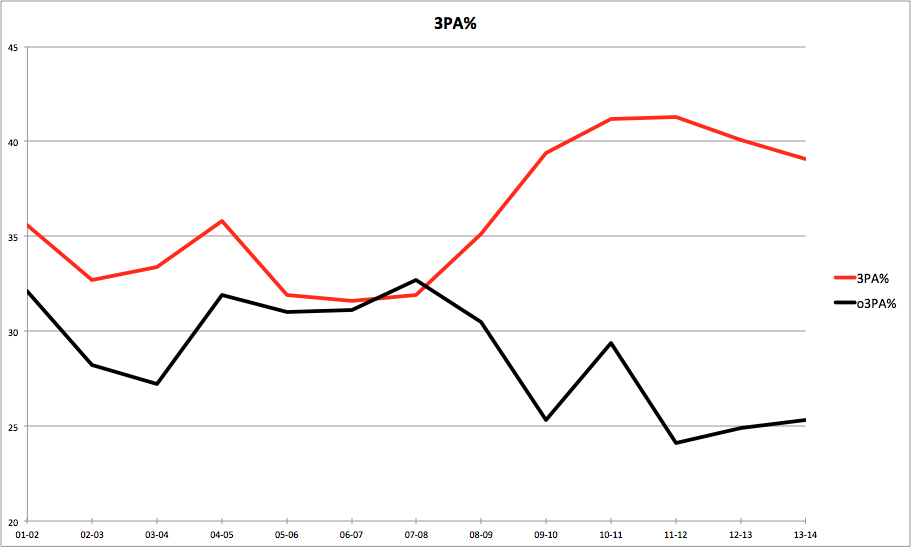 Starting with the 2008-09 season, we see Wisconsin attempting lots of three-pointers on offense, and selling out to limit opponent three-pointers on the other end. Unlike Beilein Ball, however, Wisconsin’s offense is not built around emptying the paint area to create a lot of high quality shots at the rim (Michigan routinely converts over 70 percent of its chances at the rim, per hoop-math.com). Rather, it’s mostly built on player versatility, with all five players possessing the ability to post up as well as hit three-pointers (I’m certain that Nigel Hayes’ sudden interest in

outside shooting came as an offseason assignment from his coaches).

But that kind of versatility is usually theoretical, not practical. A great passing big man like Joe Krabbenhoft is not a highly skilled outside shooter. A great shooting big man in Keaton Nankivil had trouble reaching the free throw line. Great defenders like Ryan Evans and Jared Berggren didn’t provide enough offensive punch.

But Ryan’s most recent crop of big men not only can shoot, but can also draw fouls and finish on the interior. It’s how last year’s team was not only an excellent outside shooting team, but it also finished on the interior (3rd in the Big Ten in 2P percentage) and got to the free throw line at an impressive clip (2nd in the Big Ten in free throw rate). And this was all accomplished without turning the ball over (for the 6th year in a row, Ryan’s team ranked in the top-5 nationally in lowest turnover rate).

As Nigel Hayes moves into the starting lineup, this year’s frontline should be the best in the Big Ten, and frankly, the offense should be the best in the conference as well. If you’re a Wisconsin opponent, you know how to account for defending not one, not two, but three players standing 6-8 or taller, each of whom are comfortable shooting three-pointers. How many coaches in the Big Ten have three players at their disposal that can defend that? Michigan State doesn’t even have three players that are 6-8 or taller.

The defense will probably be better, too, as Hayes replaces Ben Brust in the starting lineup (no offense to Brust—a fantastic rebounder for his size—but a sophomore Hayes figures to improve on that).

This kind of endorsement is typical when you’re reading about a Final Four team that returns 80 percent of the minutes, which includes two promising freshmen making the leap to sophomores. Like I said, boring.

You’ll have to excuse me, as I’ve had Big Ten tunnel vision for the past 5 years…