The Final Four consists of the number 1, 3, 4, and 15th-ranked teams by Pomeroy measures. It's not hard to find the ugly duckling, in that context. But even before the ball was tipped in Michigan State's first round matchup against Georgia, this was a curious team. I'm on record that I was dead wrong about the Spartans' prospects coming into the season. I don't think my outlook was borne in I Hate Tom Izzoville, either. MSU lost its three best players from last year (Gary Harris, Adreian Payne, and Keith Appling), and replaced them with a trio of non-impactful freshmen and a transfer who hit 30 three-pointers in conference play, but didn't do much else (considering Harris, Payne, and Appling combined for 72 three-pointers in Big Ten play last year, that's a deficit). Gavin Schilling and Alvin Ellis were the only two returning sophomores, and while Schilling definitely improved, we're still talking about a severely foul-prone center that has a scouting report that simply reads "Rebounds. Can Dunk." As for Ellis, he was better as a freshman.

Everyone else on the roster was an upperclassmen, which usually means "known commodity." So I don't think I was terribly off-base when I wrote the following:

_Michigan State is not going to compete for the Big Ten title this season, that much is clear. But we’re still seeing a lot of projections putting the Spartans in the top-25, though I’m not sure I can sign onto that, either. For one, I’m not sure where the improvement comes from. The only returning sophomores are Gavin Schilling and Alvin Ellis. Schilling had his moments last year, but he, like Ellis, is an extreme role player that seems unlikely to grab a larger share of the offense. Travis Trice is a three-point specialist who sometimes plays a point guard on TV, though Valentine might actually be better-suited for the role. Valentine and Branden Dawson are nice enough players, but I’m not sure there’s a lot more to see out of either of them. Both players were third and fourth options while on the floor last year, but now they’re expected to be the centerpieces of this attack. While Valentine should improve on his finishing (just 49 percent at the rim last season), the added responsibility will likely lead to more bad shots. As for Dawson, he’s incredibly effective around the rim, where over two-thirds of his shots have come from in his career. But he’s not a jumpshooter. When the shot clock is winding down, he’s not someone I want to see with the ball in his hands at the top of the key. _

And ultimately, that’s the problem I see with MSU’s offense this season. A lot of players who are good in the right role, but all role players to be sure. I see a defense first, second, and third team here, and one that appears headed for the bubble.

Obviously, that's quite the miss on both Trice and Valentine. Trice was probably the best point guard in the Big Ten not named "D'Angelo" (sorry, Yogi), and Valentine was good enough to merit comparisons (at least, offensively) to Draymond Green. Trice's leap was especially miraculous, as he increased his usage by 79% while keeping most of his efficiency (a tall task, given that last year he was well suited to the corner marksman role now occupied by Bryn Forbes). Seniors—especially those not regarded as one of the nation's top-100 players in their high school class—generally do not undergo this kind of transformation. It's probably not going to happen for Bryn Forbes, or Anthony Clemmons, or Joey King, or Benny Parker. Travis Trice is a unicorn that rides the Loch Ness Monster to work after feeding his pet Bigfoot. You will not witness such a thing often.

The massive leaps made by Valentine and Trice therefore explain how Michigan State maintained its conference efficiency margin from last year. But how did these Spartans make it all the way to Indianapolis? Simple—they stopped played like Michigan State: 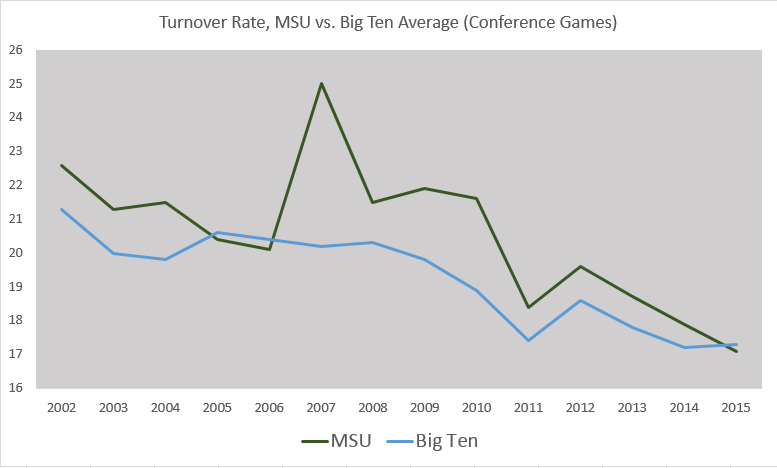 For years, it's been a struggle for Tom Izzo's teams to keep its turnovers in check. I'm sure that's as much a function of the style of offense the Spartans usually choose to employ (one that traditionally has included a lot of offensive rebounding and fewer 3s) as anything else, though even when the team plays out of character (for instance, by shooting a lot of 3s last year, or in 2004 when the team's offensive rebounding was relatively poor) it's still a struggle. I suspect the fact that Michigan State runs so many set plays also plays a role, but that's mere conjecture on my part.

In any event, even this season the Spartans just barely were better than average in the Big Ten. This is not unprecedented, nor is it a sign that turnover problems are gone. Keep in mind that "barely better than average" are not words usually associated with Michigan State basketball, and certainly not going to strike fear in the heart of a Final Four opponent.

But in their Tournament run, the Spartans have posted a turnover rate of just 13 percent over 245 possessions. Now sure, Louisville's defense isn't up to Pitino standards this season, and Virginia and Georgia generally don't try to force turnovers, but keep in mind the story the graph above shows. Michigan State wasn't playing VCU for 14 seasons, they were playing Average Big Ten Opponent, who usually is not one for a pressing style of basketball. And yet, too many MSU possessions did not end with a shot attempt.

Is this newfound respect for possessions a mere statistically anomaly? Newly-discovered offensive wrinkle? Something as simple as fewer minutes for the turnover-prone Lourawls Nairn? We'll find out Saturday.

Are you having fun yet? The Badgers are headed to the title game, and once again the story is…

Another One in the Books

The regular season is over, and just like everyone figured, **Wisconsin **came out on top. And not just in…