One theme of tempo-free analysis is that basketball can be distilled into Four Factors: shooting (accounting for point rewards for converting 2s versus 3s), rebounding, turnovers, and free throw attempts. These items are, of course, normalized for opportunities of each—you cannot grab a defensive rebound on a made basket, for example.

But of those four factors, it's no secret that shooting dominates. A decided edge in shooting can and does trump deficiencies in the other three (ask Michigan fans about that). But we can do better than just chalk something up to "shooting," and thanks to Shot Analytics and Hoop Math, we now have the data to do just that (all numbers below courtesy of those two sites).

First, let's talk about the dreaded "mid-range" shot. The biggest issue with that shot is that it counts for just two points, and college players are really no better at making mid-range shots than 3s. They also do not generate as many free throws as shots around the rim (which also have the benefit of higher field goal percentages). In short, if a team is taking a lot of mid-range shots, it needs to make up for that with a very high shooting percentage. And that's the problem with Illinois: 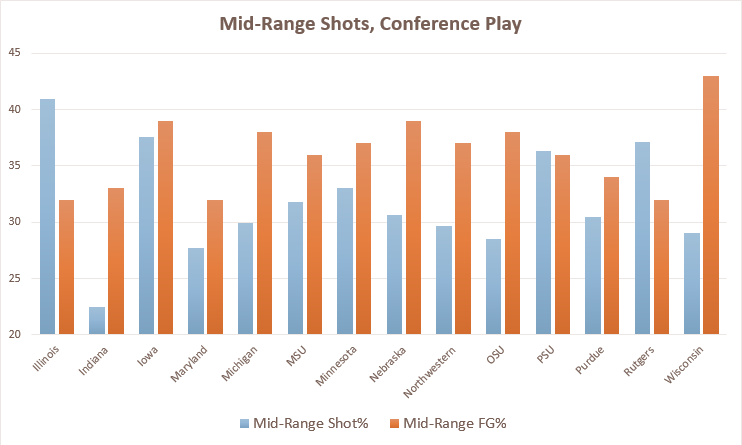 The Illini lead the conference in the percentage of field goal attempts that come from the mid-range. The fact that Illinois is also tied for the worst-shooting team on mid-range shots suggests that Illinois might not be attempting these shots by design (it's a bad shot and the team isn't good at it at this volume—we should give John Groce the benefit of the doubt).

For Illinois fans, this is sadly nothing new—the final years of the Bruce Weber regime featured offenses that had all of the trappings of a perimeter-oriented team (more on POTs in a bit) except, you know, that extra 50% of scoring that comes with a made shot.

The Illinois results are interesting in that Groce's team is actually shooting 3s with relative accuracy: 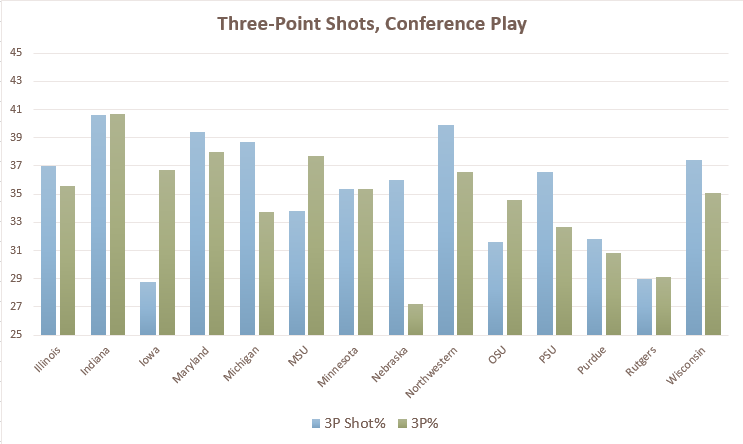 The Illini rank 6th in the Big Ten in 3-point percentage, which is a departure from Groce's first two teams (ranking 11th and 10th, respectively). This backs the notion that Illinois is not a team without shooting touch, but rather one that is taking too many mid-range shots. This is something like a marginal cost argument, so bear with me—as Illinois attempts more mid-range shots, those "extra" shots become more difficult. There's a baseline number of "open" shots that an offense can generate. But ultimately, every offense includes a number of contested shots. If a team (like, for instance, Wisconsin) has lots of players on the floor that can execute every kind of shot, that team will be in a position to shoot more open shots than others. But not every player can hit every shot, meaning some open shots are passed up. When an open shot is passed up, it increases the likelihood of a contested shot later in the possession. So what kind of shots is Illinois passing up, leaving it with too many difficult two-point jumpers? 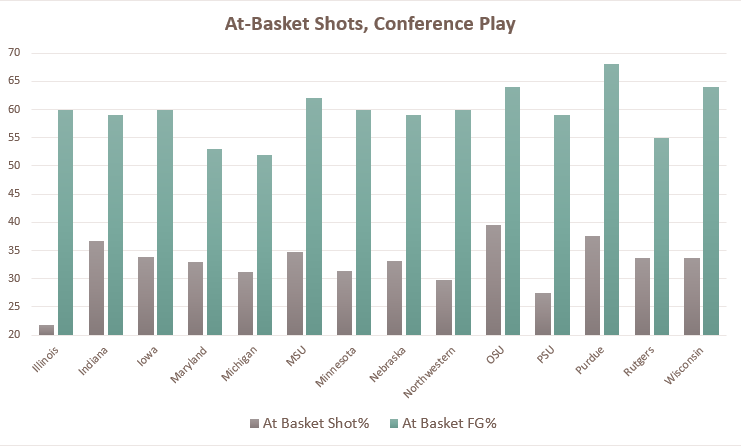 Illinois either does not create enough chances at the basket for players that are capable of converting them, or is simply reluctant to take those shots (again, giving John Groce credit, the former seems more likely). The Illini are basically trading shots at the rim (which they convert at a 60 percent rate) for shots in the mid-range (32 percent). That's the biggest reason why the team ranks 10th in offensive efficiency, at present.

Indiana has also made a similar trade, but it's trading mid-range shots for 3s. Here's the mid-range graph again:

IU is "last" in the percentage of its FGAs from the mid-range. But rather than trade those shots for at-the-basket looks, the Hoosiers are playing to their strengths: 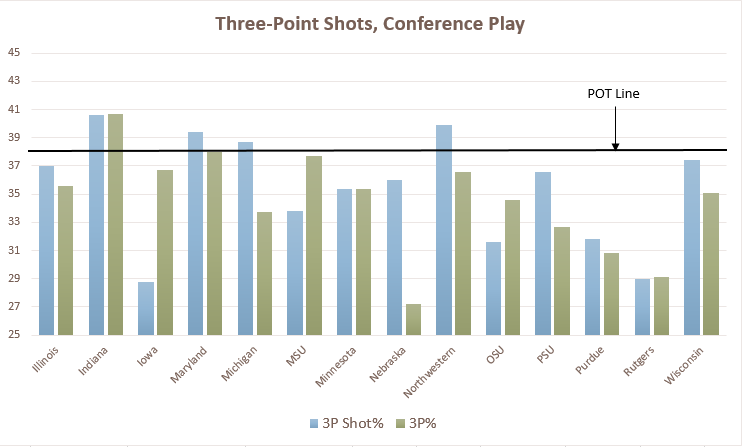 A little over 40 percent of IU's field goal attempts are 3s, which the team hits at over a 40 percent rate. No one has hit the 40/40 Club in the Tempo Free Era (Michigan and MSU came close last year, IU almost did it in 2007, the 2005 Illini came the closest), but IU is on pace to do it, with Maryland right there and Northwestern even with a puncher's chance.

The POT Line lies at 38 percent, meaning a team that dedicates 38 percent or more of its field goal attempts to 3s. As far as I know, it's arbitrary and an edict from the digital scrolls of the Wonk, which I think makes it unassailable law at this point.

Another One in the Books

The regular season is over, and just like everyone figured, **Wisconsin **came out on top. And not just in…

Let's talk Coach of the Year

In just a little over two weeks, the regular season will be over and we'll begin the best month…