Penn State is one of the worst outside shooting teams in the country, and it's basically one person's fault.

Too much of this

Josh Reaves is shooting 9 percent on three-point attempts. That in and of itself is not such a big deal. But coupled with the fact that he's attempted 33 three-pointers to this point (halfway, assuming Penn State plays just one Big Ten Tournament game), it's rather remarkable.

There are plenty of poor outside shooters in college basketball, and many are demonstrably worse than Reaves. But what's hard to find is someone who has been as unsuccessful from deep as Reaves who continues to attempt 3-pointers at a healthy rate. Usually, poor shooters don't take a lot of outside shots. Failing that, once enough shots miss, they slow down. Failing that, the coach stops playing them so much. But Reaves is firmly in Penn State's rotation, logging an average of just under 22 minutes per game on average in PSU's first three conference games.

This tells me two things, namely that neither Josh nor head coach Pat Chambers thinks the inaccuracy is likely to continue. If it did, it would be something of at least recent historic note: 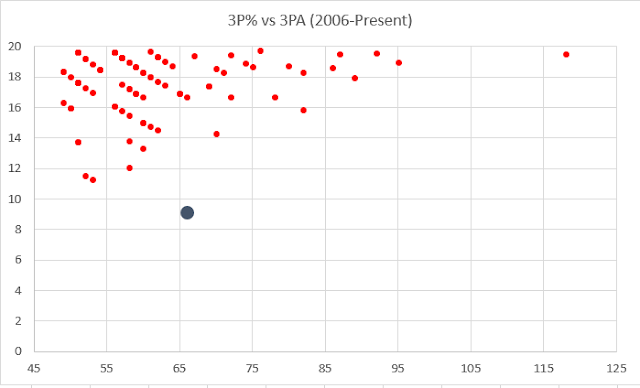 That data comes courtesy of Ken Pomeroy, and shows all of the Division I shooters since 2006 that attempted at least 49 3-pointers and converted on fewer than 20 percent of them. That big blue dot toward the bottom is where Reaves would finish if things continue as they are.

More likely, Reaves will start to see some shots fall, and he'll avoid this infamy. Or he'll stop shooting 3s and/or stop playing as much. I'm not sure which of those is best for Penn State—after all, Reaves only needs to make 15 percent of his 3s (at his current shooting pace) from here on out to avoid finishing last on the list. That's better than 9, but it's not exactly good, either.

Can Iowa keep this up?

Currently, Iowa sits at #2 in the Pomeroy rankings. The team has already swept Michigan State and beat Purdue…

Just a handful of meaningful games left before conference play begins on December 29th, but it seems like there's…