Illinois: BUY
**
** Although Illinois lost to Miami in the Challenge, there's a fair amount of context to consider. First, Miami is a very good team, still without a loss after playing Florida (on the road) and Illinois. Kenpom has the Hurricanes as a top-20 team at present. Also, the Illini lost this game by 9 on the road, and considering that home-court advantage is worth about 4 points on average, that's a pretty tight game. Finally, consider that the Illini shot just 22 percent on jumpers against Miami, and it's easy to explain as a one-off. Illinois also beat a quality Baylor team in Las Vegas, and has sustained a turnover rate under 15.0 in 6 of its 7 games so far on the season. John Groce's team is going to shoot better than it did against Miami this season, and the low turnover rate should ensure plenty of shots.

Indiana: HOLD
**
** This was a hard "SELL" a little over a week ago, but a couple things have happened. First, Eastern Washington might not stink after all. The Eagles are 6-1 with a sole road loss at SMU. Second, and most recently, the Hoosiers tore Pitt apart in Assembly Hall in a game that was never close. I suppose a couple of caveats are in order before we get too excited—first, this figures to be one of Jamie Dixon's worst Pitt teams. Second, rebounding remains a concern as the Panthers secured 52 percent of their misses. Third—I don't know, maybe he is a steal, but odds are this is going to be one of the best nights of Emmitt Holt's season (15 points on 6-6 shooting, 5 rebounds, 2 blocks, 0 turnovers). He was headed to prep school with mid-major offers before Indiana swooped in late. Balancing it all out, IU still looks like a team more likely headed to the NIT than the NCAA Tournament.

Iowa: HOLD
I was pretty close to making this a "SELL" despite the win over UNC, but decided against it. Why sell? Well, Iowa lost the only other two meaningful games they played this season, which is conduct unbecoming of a team that should be in the top-3 in the conference. Plus, Iowa doesn't beat UNC if they don't go to the free throw line 24 times, making 21 (87.5%). Considering UNC attempted more shots at the rim, that's a bit of an outlier. So you have to at least consider that Iowa was a little bit lucky against the Tar Heels.

That said, the problem with Iowa's fade last season was defense. It's early, but right now the Hawkeyes rank 19th in adjusted defensive efficiency. Against the top-20 teams they've played, they've allowed PPP marks of 1.05, 0.95, and 0.89. The defense is under control.

Are there other concerns? Sure—and they're typical of what you'd expect of a team light on guards (high turnovers, poor outside shooting). But overall Fran McCaffrey's team is trending in the right direction.
_
_Maryland: BUY
Although Maryland was pretty well manhandled at home by Virginia, keep in mind the Terrapins were playing without offensive centerpiece Dez Wells. Wells will be back right around the time conference play begins, and I don't expect much rust with such a short absence. But more promising is the fact that Melo Trimble appears to be an instant impact freshman. He won't continue to shoot like this (59.2 eFG), but the fact that he's shot 62 free throws against 31 two-pointers should not be taken lightly. However he shoots from the field, Trimble should get plenty of scoring opportunities at the stripe. I'm still not sold this team will be anything more than an 8-10 win team in the Big Ten (though I think it's likely they end up on the high end of that range) because of defensive shortcomings, but this could have gone really poorly for Mark Turgeon.
_
_ Michigan: BUY
With three solid performances against three solid teams (Oregon, Villanova, Syracuse), it's becoming harder to come up with reasons why Michigan is not a top-2 team in the Big Ten. That said, there are still reasons to believe this team is not as good as it was in the past couple of seasons. John Beilein's offense is designed to create easy two-point opportunities, but so far the Wolverines rank 162nd nationally in that category. That would be the worst showing in that department since Beilein's initial 10-22 season. Of course, unlike that team, this one can shoot extremely well from 3.

Michigan State: HOLD
These recommendations are based off our preseason projections, so if you're one of those people that figured Michigan State was a top-25 team, now's the time to sell. But is that unfair? Sure, the Spartans lost to all of the quality teams they've played so far (Duke, Kansas, and Notre Dame), but those games were all on courts outside East Lansing.

Fair, but frankly, I don't think MSU can continue to shoot like this. Per hoop-math.com, Tom Izzo's team is hitting 40.6 percent of their jumpers (2s and 3s, combined). That's very high, obviously, but other issues abound. For one, the defense has been helped out quite a bit by poor opponent 3-point shooting, which is unlikely to continue. Also, Michigan State is attempting far fewer shots at the rim than usual:
**
**

% shots at the rim

The decrease in attempts at the rim has not resulted in more accuracy there, either (especially when you factor in the competition). What's also distressing is that MSU is not reaping the conventional benefits of being a perimeter-oriented team (fewer turnovers). Really, the only thing on offense the team is doing well right now is making jumpshots. They wouldn't be the first offense to ride that strength all season. But my bet remains on the other end.
_
_ Minnesota: SELL
The Gophers haven't exactly impressed with bottom-line results (losing at St. John's and squeaking by a pedestrian Georgia team), but what appears worse is that so much of what the team and players are doing well looks unlikely to continue. This team is defense-first, and that defense is in the business of selling out to get turnovers. This approach can obviously work if you're recruiting like Louisville recruits. I'm not sure it will work in the Big Ten with 3-star athletes, because everyone else is so good at taking care of the basketball. On an individual basis, I'm not seeing any big leaps, and the only pleasant surprise has been the play of Nate Mason. While he is taking care of the ball as a co-point guard, the best part of his game thus far has been his rebounding ability. If he weren't 6-1, this would matter.
_
_ Nebraska: SELL

I know that the Cornhuskers picked up a win on the road against Florida State, but so far, this team does not look improved over last year's squad despite the return of most of the roster. Last year's team was very good on defense, while very mediocre on the other end of the floor. Looks to be about the same this season:

That's not much of a move on either end, and that's actually pretty worrisome as last year's numbers reflect a full conference slate, whereas over half of this year's competition so far has come against the likes of low major teams such as Central Arkansas.The drag on last year's offense was a complete vacuum at the point guard position, which is still the case this season. Tai Webster continues to demonstrate that he's not a long term answer there—I expect freshman Tarin Smith to start receiving more minutes in short order.

Northwestern: SELL
This is obviously Not A Good Sign, as I had the Wildcats pegged for a basement team at the season's outset. But all they've done since is squeaked by the likes of Elon and North Florida at home, got smacked around by Northern Iowa, and lost to Georgia Tech at home in a game where they never had the lead. Freshmen are playing a ton of minutes, but it's not because any of them are legitimate contenders for Freshman of the Year. I also do not envy Chris Collins right now. If I were the coach, I'd be paralyzed with indecision if tasked to fix the team. Where would you start?
_
_ Ohio State: HOLD
Sure, Ohio State never made the matchup against Louisville much of a game, but it was a road game against a likely Final Four contender, after all. The Buckeyes have beaten the snot out of the rest of their schedule, but all of those teams were cannon fodder. What's very positive, however, is that Thad Matta is getting back to his pre-Craft roots of having a team that can flat-out shoot. The Buckeyes rank 9th in eFG, and that's while Matta laughably plays a 10-man rotation. C'mon Thad, we know that's going to shrink to 6 in conference play.
_
_Penn State: SELL
The Nittany Lions struggled to put away a bad Virginia Tech team (they've lost to Appalachian State. At home.) at Bryce Jordan. Offensively the team is, as expected, deferring to D.J. Newbill to make things happen. And to his credit, he is (54.0 eFG while attempting 31 percent of the team's shots while on the floor...which is pretty much always). But the rest of the squad isn't doing enough, particularly on the block, as the Nittany Lions are converting just 57 percent of their shots at the basket. Against the type of schedule they've played so far (290th in opponent Pythagorean rating), that's a problem. But don't expect Penn State to be exposed anytime soon, but it will be a sudden wakeup call—the first game against a likely Tournament team is New Year's Eve. At the Kohl Center.

(Also, apologies for omitting the Nittany Lions on the initial list. Still working out some kinks.)
_
_Purdue: BUY
The last time Matt Painter had an offense this good, Robbie Hummel was still playing for him. And most surprisingly, the offense has been great even with A.J. Hammons largely picking up where he left off last year as an inexplicably turnover-prone center that fouls way too much. In part because of that, but more because freshman Isaac Haas is the goods, that might not matter much this season. Haas is making 72 percent of his shots, has been one of the best rebounders in the country, and draws more fouls than anyone else in Division I. Last call for the bandwagon.
_
_ Rutgers: HOLD

The win over Clemson might say more about Clemson than Rutgers, but for a team that lost to St. Peter's by 18 at home, it counts as a tremendous victory. Unfortunately, St. Peter's still happened, and the hapless Scarlet Knights were absolutely embarrassed by Virginia.

Virginia scored 45 points and covered an 18-point spread. In basketball. Has that ever happened before?
— Rob Dauster (@RobDauster) November 30, 2014

Wisconsin: HOLD
Why did Wisconsin lose to Duke? Principally, it was because Duke made its jumpers (58% from 3, 75% (!!!!) on mid-range shots). Sure, allowing 38 percent of the other team's shots to occur at the rim is too many, but it's not excessive. After all, a full 40 percent of Wisconsin's shot attempts occurred at the rim. Everywhere else, the Badgers were even or better than the Blue Devils: 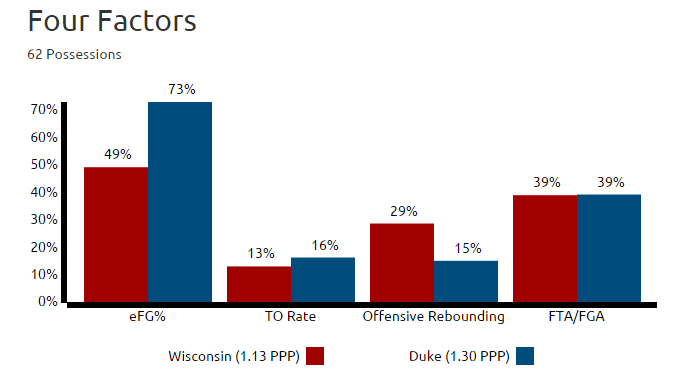 (per Shot Analytics). That said, keep an eye on Wisconsin's two-point defense going forward. It isn't bad, per se, but it's also not as good as you'd expect with such a tall lineup.

Otherwise, this is the same machine we figured we'd see this year. Until further notice, the Badgers are your favorites.

Over the past week or so, the Big Ten has dropped four games to teams likely to finish outside…

I'm kind of sick of making excuses for Iowa. I chalked up last year's bad finish to some bad…