Penn State has been one of the more consistent teams over the past decade or so. Every year, the offense is tightly-controlled by two players (and one of them is always the point guard). On defense, the team is undersized and typically struggles with either two-pointers (Ed DeChellis) or fouling too much (Pat Chambers). 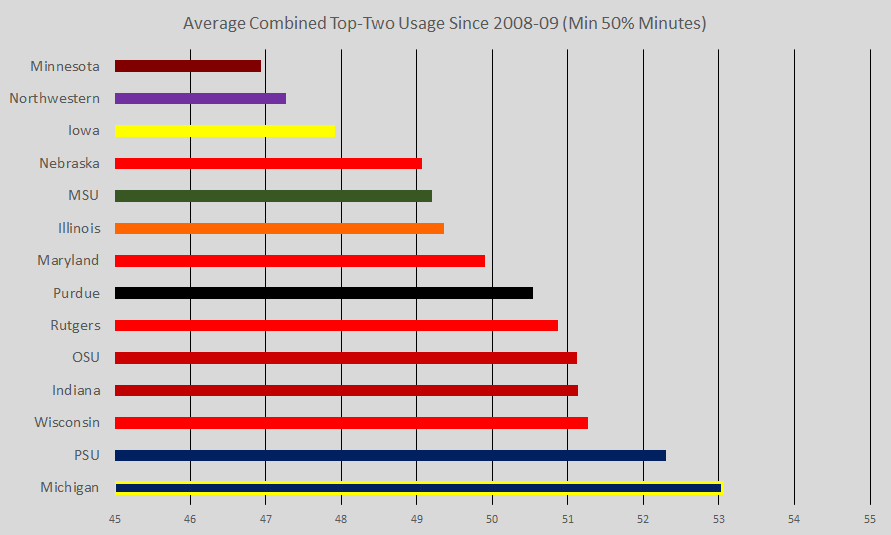 Only Michigan can claim higher usage consolidation among two players, and that’s largely a result of the Manny Harris/DeShawn Sims teams we saw when John Beilein first arrived in Ann Arbor. But with Penn State, it’s been a consistent identity: it was Talor Battle and Jamelle Cornley, then Jeff Brooks replaced Cornley, then Tim Frazier and Jermaine Marshall replaced both, then D.J. Newbill replaced Frazier for a season, and then last season Frazier replaced Marshall. Remarkably, this has been across two different coaches as well.

There’s nothing inherently wrong with a lot possessions being tied up with a couple of players—Evan Turner and William Buford were pretty good—but it does depend on the reason, doesn't it? Not to take anything away from the cast of characters in the preceding paragraph, but Turner and Buford they are not. I suspect that in the Nittany Lions’ case, the tendency to centralize the offense has more to do with a lack of production at the other positions.

This pattern leads to a lot of “what if?” questions when one of the main cogs leaves. Tim Frazier’s eligibility is all gone, and now Chambers is likely looking to Brandon Taylor to take on a large chunk of his possessions. And if Taylor can be as efficient as he was last year while doing so, and the rest of the team likewise shows year-over-year improvement while also consuming more possessions (if Taylor is replacing Frazier, someone needs to replace Taylor), then this can all work and Penn State can get better on offense.

Similarly, Penn State’s interior defense was surprisingly robust in Big Ten play—best two-point field goal defense in the conference, in fact. But overall the numbers ranked 9th in defensive efficiency largely because the team allowed the most second chances and opponent free throws. Again, you’re tempted by “what ifs”—what if Donovan Jack can maintain his shotblocking ways without sacrificing his rebounding or without averaging a DQ in under 30 minutes of court time? What if the bench is able to raise its rebounding game from “awful” to “mediocre?”

What ifs abound with this team. But past experience has taught us that efficiency declines with usage increases, and that’s especially true when we’re not counting on freshmen becoming sophomores. We also know that while big men tend to foul less over the years, that decrease is usually marginal, unless it’s combined with a departure from high major hoops to the fresh air of lower competition levels (see Colton Iverson).

It’s a lot of what ifs and exception-hunting to see this team making the NCAA Tournament this year. While Pat Chambers’ teams have excelled and struggled in various ways in his three years at State College, the two constants appear to be 1) the offense cannot shoot and 2) the defense cannot stop fouling. Wishcast if you want, but the safe play here is to bet on more of the same.

Warning: this post starts on the soapbox. If you would rather not read that—and I don't blame you—…

You’ll have to excuse me, as I’ve had Big Ten tunnel vision for the past 5 years…