Chris Collins’ arrival in Evanston was met with fanfare—that’s one of the benefits of hiring a Duke assistant—but otherwise this was a typical Northwestern season that was a predictable as a Judd Apatow movie: Some Dude in arrested development is going to grow up, and for some reason smoking weed (usually with Seth Rogen) is going to help him on his journey.

At least, that’s how Northwestern’s 14-19 season appeared on the surface. But while Bill Carmody almost always failed on the defensive end, Collins was able to put together the 14th-most efficient defense in the country last year. Carmody partially made up for his defensive shortcomings with an above-average offense, but NU’s offense last season was epically bad.

How bad? The gap between the Wildcats and the next-worst team (Illinois) on a per possession basis was roughly the same as the gap between Illinois and the 6th-best team (Ohio State). 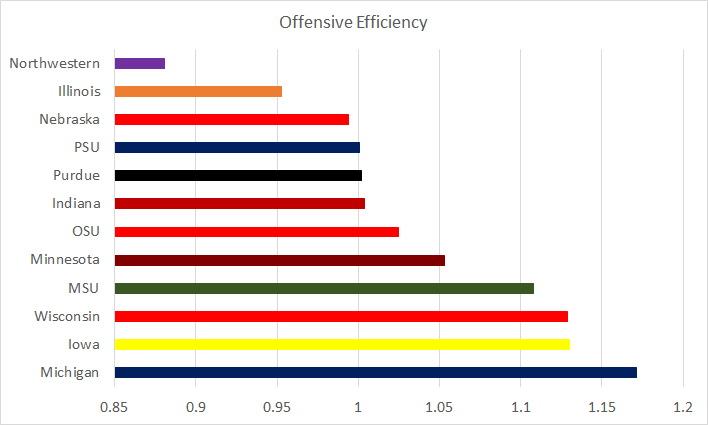 It was legitimately the worst Big Ten offense in the Kenpom Era (dating to the 01-02 season), and that includes some terrible Big Ten teams. Frankly, that’s the good news. It’s hard enough to be that bad once, doing it twice is unfathomable. Or is it? As John Gasaway examines, the gap between Illinois and Northwestern can be almost wholly explained by NU’s aversion to offensive rebounds. And the clear takeaway is that this aversion wasn’t about balancing priorities, offensive schemes, or even talent. It was just a team that decided, as a matter of principle, that there are no second acts in offensive possessions.

It’s a fascinating theory, and I have to agree that to a certain extent, it’s true. But it’s worth investigating just how much Gasaway’s theory is Northwestern running away from their own missed shots, and how much of it is the team deciding to deny—for once—other teams the luxury of collecting their own misses. After all, the primary metric Gasaway uses is offensive rebounds over defensive rebounds, which is compelling because the two actions seem very similar, other than the events immediately preceding. And while I can’t vouch for that here, let’s take that as true for now.

But what changed more last year—Northwestern’s lack of offensive rebounds, or its sudden interest in defensive boards?

I think Gasaway made a solid case that Offensive Rebounding Aversion Syndrome is real and problematic for coaches afflicted with the disease. What I don’t know yet is whether Chris Collins has contracted the disease. Another season of rebounding indifference would go a long way in confirming the diagnosis, which would be very bad news for the Wildcats, as this disease has killed off several other coaching tenures in the past.

On to happier news—defense. In the Carmody years, the primary culprit behind poor efficiency numbers was devastatingly-bad interior defense. Almost always, Northwestern was terrible at ending possessions by rebounding misses. And that part was still pretty bad last season (10th in the Big Ten in defensive rebounding percentage).

But the other aspect that NU usually struggles with, two-point defense, was markedly improved. The Cats ranked 4th in the Big Ten in opponent two-point percentage—they never ranked higher than 6th under Carmody.

So the question this season is whether Northwestern can hold onto the gains on defense while shoring up the offense. The first part of that seems promising. The biggest offseason departure is Drew Crawford who, for all his offensive talents, was not a particularly great defender (though he did grab rebounds). But then again, his likely replacement in the rotation, Nate Taphorn, was even worse.

Then there’s the fact that Collins will likely play the incoming freshman class quite a bit. While I realize this class in particular is more talented than what NU usually brings in, there still aren’t any instant impact players in the group. Likely, as a group the freshmen will struggle.

The freshmen are the key piece in this, however. Collins’ first class appears to be—on paper, at least—an uncharacteristically good one for the program. And I expect this class’ successes and failures will, in large part, come to define Collins as a coach. So really, the more interesting question this season will be whether these freshmen appear to be cut out to be the centerpiece of an NCAA Tournament team in 2-3 years.

Because the team will be so young, I don’t see a lot of success this winter. That’s not so bad, considering how young the rotation will be . But beyond evaluating the talent level of the freshmen, the key issue for this season will be whether Collins can learn to love offensive rebounds.

For years, our annual Wisconsin preview has been a source of particular excitement for me. I say this mostly…