Thanks to some timely shooting by Rutgers, and a couple of injuries to Wisconsin starters, most of the media probably regards this year's iteration of Bo Ryan Ball as a very good team but not one worthy (barring a deep tournament run) of any lengthy discussion in a historical sense.

That would be a mistake, because this year's Wisconsin team is a sight to behold on offense: 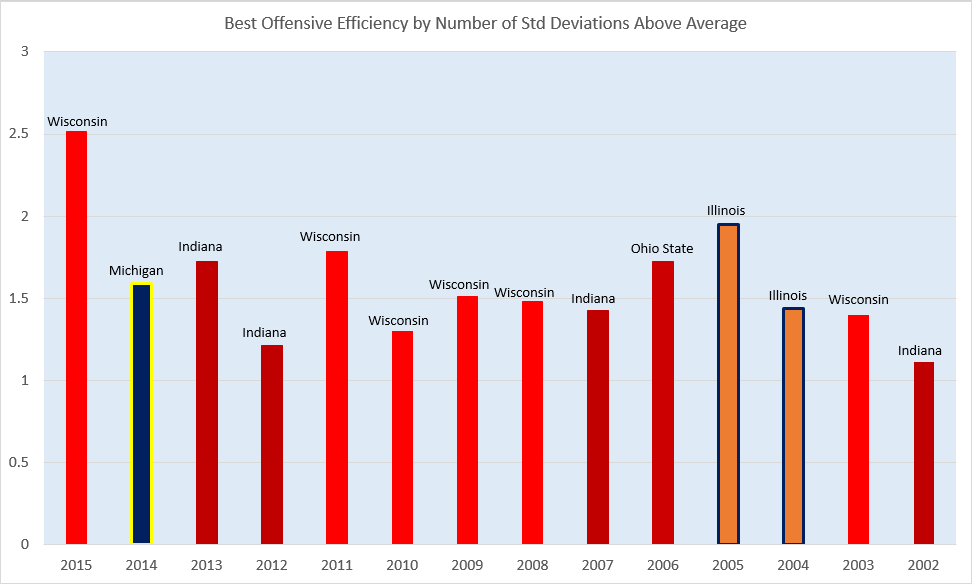 (If you want to design a great offense, have the team wear red. Every little bit counts.)

For years, the 2004-05 Fighting Illini have been the gold standard by which all other offenses should be measured. Barring a late collapse, that changes this season. The Badgers are assaulting defenses to the tune of 1.28 points per possession in conference play, the highest such raw mark in the Tempo Free Era (also known as "as far back as kenpom.com goes"). How have the Badgers achieved such lofty heights? By addressing last year's deficiencies while opting not to indulge in any of the conventional tradeoffs.

Generally, if a team wants to make more 2s and get more offensive rebounds, it means it needs it needs taller players that are better at making shots in the paint. These are usually not the same guys that are skilled with ballhandling and making 3s. Presented with these downsides, Bo Ryan apparently gave a pithy "I'm good, thanks" and went on his way. Maybe no facts illustrate this point better—Frank Kaminsky and Nigel Hayes own the highest assist rates on the team in Big Ten play, and they're also shooting a combined 45 percent from three-point range. Exactly who is capable of defending that?

After last season's Final Four run, the Badgers are getting more respect these days. But I still think the team's slow tempo (58 possessions, slowest in the Big Ten) is doing a yeoman's job of masking just how superb Bo Ryan's crew is on offense. It's been at least 13 years since we've seen an offense this good (Wisconsin also holds the Tempo Free title for best adjusted efficiency for all games—by a much narrower margin over last year's Michigan team). It might be another 13 before we see it again. Skipping over the Badgers because of the perception that they're "boring" or "plodding" would be a mistake—this is offensive perfection.

Let's talk Coach of the Year

In just a little over two weeks, the regular season will be over and we'll begin the best month…

Iowa really should be better. Not only is Aaron White having an All-Big Ten caliber season, but he has…