College basketball's version of the Chicago Cubs hopes the stars are similarly aligned this season. Northwestern famously has never been to the NCAA Tournament, but the program appears to be closer than ever to hearing its name on Selection Sunday...and not during the NIT Selection Show.

Last year, head coach Chris Collins guided the Wildcats to a 20-win season, which equalled the high point under prior head coach Bill Carmody. Unlike Carmody, however, Collins' Wildcats were not thoroughly outmatched in Big Ten play: 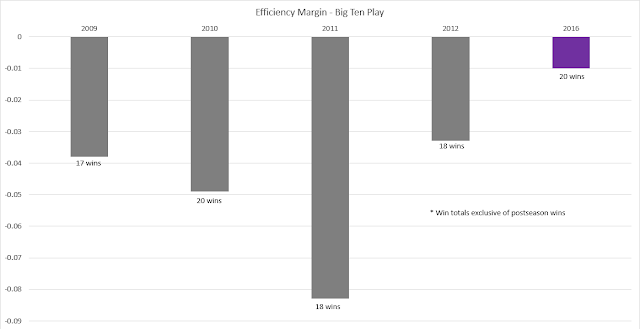 The gray Carmody seasons were his best (the Shurna/Coble/Thompson seasons). And for the most part, those teams were experienced. Last year's Wildcat squad was not. By kenpom experience, this team was in the 200s, and two of the top-5 players by conference minutes were freshmen.

And, not to diminish the efforts of the now-graduated Alex Olah and Tre Demps, but that means this year's team should improve on last season's performance. Sophomores Aaron Falzon and Dererk Pardon should take the usual sophomore leap. Former top-100 recruit Vic Law, who missed all of last season to injury, should also be improved from the last time we saw him. Finally, Collins welcomes yet another solid class to Evanston, highlighted by a couple of frontcourt players.

But maybe what excites me most for the potential of Northwestern is that there's no One Thing that they did last year that we should expect significant regression. The Wildcats were kind of just OK at everything, save free throw shooting (which can be fixed) and free throw shooting defense (which probably will fix itself). Ideally, an offense that shot as many 3s as NU did (3rd in 3PA% in Big Ten play) shoots a bit better than 33% from long range, but much of that stems from Bryant McIntosh going cold in conference play (27.6%). I think it's more likely he improves on that, than not. If he does, McIntosh has an all-around game that would put him firmly within All-Big Ten First Team consideration.

In a league filled with outstanding point guards (there's a good chance the best player on most teams this year in the Big Ten will be the point guard), that's no small feat. But if McIntosh is going to take that next step, he needs to cut down on the mid-range shots in conference play. Per Shot Analytics, this is what his distribution looked like last year in the Big Ten: 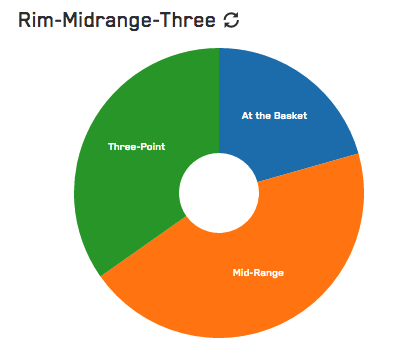 All things considered, it looks as if Northwestern is headed for the Bubble this season. In Evanston, that's a good thing, but the news gets even better—there are only two seniors on this team. Interestingly, they are mirror opposites of one another—Sanjay Lumpkin is a defensive specialist who is extremely reluctant to shoot, and Nathan Taphorn is a defensively challenged forward that can score from lots of spots on the floor.

But as players go, those respective skillsets are replaceable. So long as Northwestern does not encounter any unforeseen roster overhauls, odds are Collins gets this school dancing within the next couple of seasons.

From a certain vantage point, one could make the argument this should be a pretty straightforward preview. Due to…

All things considered, last season was a pleasant surprise for Nebraska. Despite losing the offensive focal point in Terran…