For years, John Calipari's approach to program-building has been perhaps the simplest in all of college basketball: go get the best players. It's a little on-the-nose, but they don't hand out trophies for being cunning. And while there is the occasional hiccup, it's hard to argue there are more consistent methods for achieving excellence, as the Wildcats have won a stunning 82% of their games since Cal took the reigns.

Never let it be said that Tom Izzo is stuck in his ways, because it appears he's giving this whole "recruit a bunch of 5-stars" approach a try. This fall, Izzo welcomes three top-30 RSCI recruits to East Lansing, plus another in the top-50 for good measure. Headlining the class are a pair of wings, Miles Bridges and Josh Langford. In 2015, the Spartans had top-30 talent Deyonta Davis (who was as good or better than advertised, and is now in the NBA), and the 2017 class is off to a similar start as well.

This is somewhat of a changed course for Izzo. Michigan State has always had good recruits, of course. But the quality of the class was somewhat dependent upon the talent level in the state of Michigan, allowing for the occasional Gary Harris or Adreian Payne from neighboring states.

But Miles Bridges is from West Virginia. Langford hails from Alabama. From my vantage point, it seems like the Spartans are no longer content being a destination school for players inclined to play in the Big Ten. It wants to be a destination program, period. So far, so good.

As for the immediate future, MSU's chances are entirely tied up with how well the kids play. Sure, the presence of Eron Harris, Matt McQuaid, and other veterans on the roster should ensure a relatively high floor for the team. But with this class, MSU undoubtedly has visions of a Final Four this season.

What powered the team last year was offense, and specifically perimeter offense. This is something that Izzo has embraced somewhat reluctantly, but he has allowed more three-point attempts as the Spartans have made a higher percentage of those attempts. 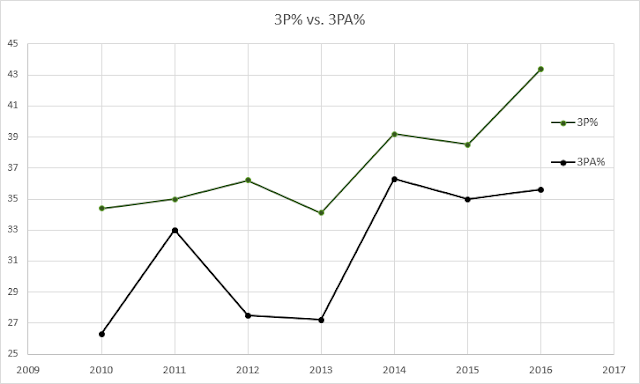 I suspect without the high volume, 40%+ 3P shooters Denzel Valentine and Bryn Forbes, that we will see a reversal of this trend.

If you've gotten this far in the preview you'll notice I've just thrown out a lot of factoids masquerading as analysis. So it's probably time to give up the bit—if you can find any analysis out there that can project Michigan State with any more resolution than "they should be pretty good," go read that. From my vantage point, you have a team with virtually worthless past-year data due to all the exits, a strong but not legendary-strong (e.g., Duke) incoming class, and an experienced coach with a long-track record of success in his current position. I feel pretty good about saying Michigan State should be one of the top-20 teams in the country this year.

Going into last season, it was widely acknowledged that the only possible drama for Rutgers was whether it would…

This year is something of a "Yes, but" season for Michigan. This is a team that seemingly…