Clearly, the Terps just stopped practicing clutch or forgot to lift the special weights that made them mentally strong.

More distressing is the fact that the best parts about Maryland's offense in conference play are the parts that have existed the program. Diamond Stone, Robert Carter, Rasheed Sulaimon, and Jake Layman each posted high offensive ratings in conference play, and each has moved on. While the point guard and Big Ten Player of the Year Candidate Melo Trimble opted to return for his junior season, his performance against the Big Ten can be rightfully deemed "mixed." While he orchestrated the offense well enough to post solid assist and turnover rates, it seemingly came at the expense of his scoring. Free throw trips were down, as was his three-point percentage. As his shot charts (conference play) from 2015 and 2016 demonstrate, Melo went ice-cold from the three-point line at the top of a key—a heavy volume area for him. 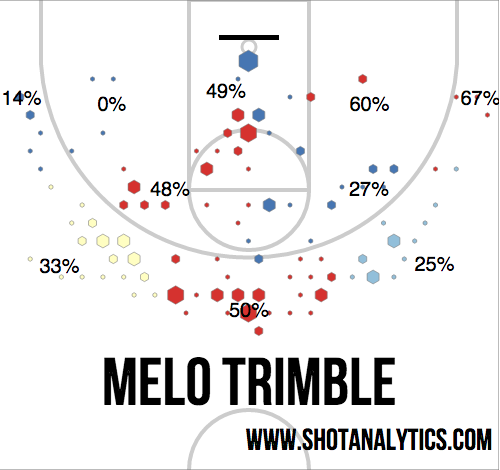 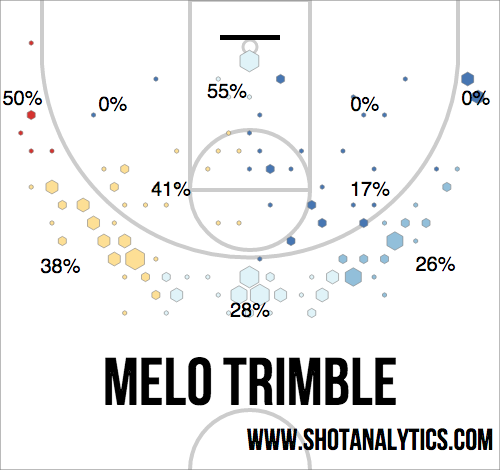 It's likely Melo simply went cold for a bit—he's an excellent free throw shooter—but without those other weapons around him, defenses will focus more of their attention on him.

There is some help, on the way however. The Terps welcome a pair of top-100 recruits, though neither is ranked where one might expect high impact results. Additionally, sophomore Dion Wiley returns after missing last season due to injury. And LG Gill has transferred from Duquesne, and will be eligible immediately. Gill has a unique skillset in that he can finish around the rim, hit 3s, and eschews mid-range shots. If he can keep that up as he moves up to major conference play, he'll be an asset (albeit at low usage).

Still, the Terps lose enough pieces—particularly in the frontcourt—that it's hard to see how the team will compete for a conference title again. In fact, it may take a special season from Trimble just to keep them off the bubble.

This year is something of a "Yes, but" season for Michigan. This is a team that seemingly…

Was that good enough? Last year was Fran McCaffrey's 6th in Iowa, after a highly successful five-year stint at…